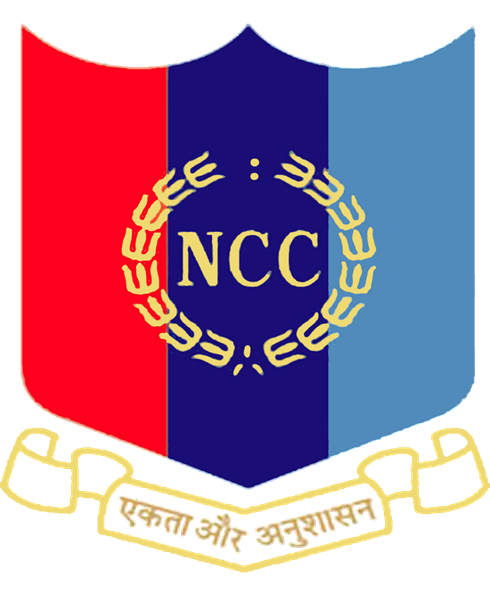 It is a part of 2 Delhi Battalion NCC, Group ‘B’, Delhi Directorate.

National Cadet Corps is the youth wing of the Indian Armed Forces with its headquarters in New Delhi, India. The NCC in India was formed the Act of 1948. It is open to school and college students on a voluntary basis. A Tri-Services Organization, comprising the Army. Navy and Air Wing, is engaged in grooming the youth of the country into disciplined and patriotic citizens. The soldier youth foundation in India is a voluntary organization. The Cadets are given basic military training in small arms and in the form of drills. The officers and cadets have no liability for active military service once they complete their course.
Rather than just being a second line of defense, NCC laid greater stress on developing qualities of leadership and officer-like qualities. The military training which the NCC cadets received was reduced and greater importance was given to social service and youth management.
VIJYANT National Cadet Corps of SGND Khalsa College has always been recognized as a responsible and disciplined organization in every aspect. Its dedication and commitment towards the nation and its interest has always been a priority for the organization.
Vijyant NCC of the College is an army wing boys NCC company and It starts its enrolment of cadets in the last week of July every year through a physical test followed by GD-PI's. Cadets take part in various activities throughout the year i.e., Army Attachment Camp, IMA Attachment Camps, SSB Training Capsules, Parasailing Camps, Para Slithering Camps, Para Basic Courses, Mountaineering Camps, Trekking Expeditions, Rock Climbing Training, Thal Sainik Camp, Republic Day Camp, Youth Exchange Program, National Integration Camps and Leadership Camps.
“I HAVE NO REGRETS, EVEN IF I BECAME A HUMAN AGAIN, I WILL JOIN THE ARMY AND FIGHT FOR MY NATION”
–BY “SHAHEED CAPTAIN. VIJYANT THAPPER VIR CHAKRA”

Youth Exchange Program: - YEP is a country-to-country exchange of cadets belonging to NCC / youth organizations of friendly countries. They participate in NCC activities of the host country to increase awareness and appreciation of each other's socio-economic and cultural realities. NCC has a vibrant YEP with 11 countries.

“GIVING IS THE GREATEST ACT OF GRACE”

In every February/ annual fest of the Vijyant NCC was celebrated with great enthusiasm, with honor of having “The Lion of Ladakh “Col. Sonam Wangchuk” Mahaveer Chakra and “Col. VN Thapper”, continued with intense competitions and events.  The celebration went eventful. Vijyant NCC was blessed to have such great souls. The event started with the arrival of guest; followed by the registration for the competition for which more than 20+ Colleges came to compete. As the event started the competitions of the Guard of honor and Squad Drill competition. Likewise, every year the fest went great full as in 2019 five of our NCC cadets completed their RDC and PM RALLY one of our CDT got selected in Raj path marching republic day camp and 2 of them have successfully completed their RDC whereas our Cadet. Mayur Kumar was selected as the All-India right marker in front row of NCC contingent of the Republic Day Parade. Cadets attended various camps in month of September like Army Attachment Camp held at Meerut Can’t, where cadets live the army life, trained of army weapons and learn various army war tactics, in 2019 Some of our cadets selected for national camps like EBSB, RCTC, AMARKANTAK, NARMADA, UP, KOHIMA TRACKING CAMPS, ALC AND OTA.

The event doesn’t end there as the mid of the day arises, a long-awaited event began “Urban Warfare”. Our cadets practiced for months to achieve the perfection; the event was marvelous. As all the events and competition came to an end the thanks giving and award giving ceremony begins. Warm thanks were given by Vijyant NCC to the fellow competitors, our cadets and our respected guest. The awards were distributed and a warm goodbye was said to everybody who gave their precious time for this event.

“A REMARKABLE DAY WHICH CANNOT BE FORGOTTEN”

EVENTS ORGANIZED BY US

Webinar on Power of Perseverance, 2021